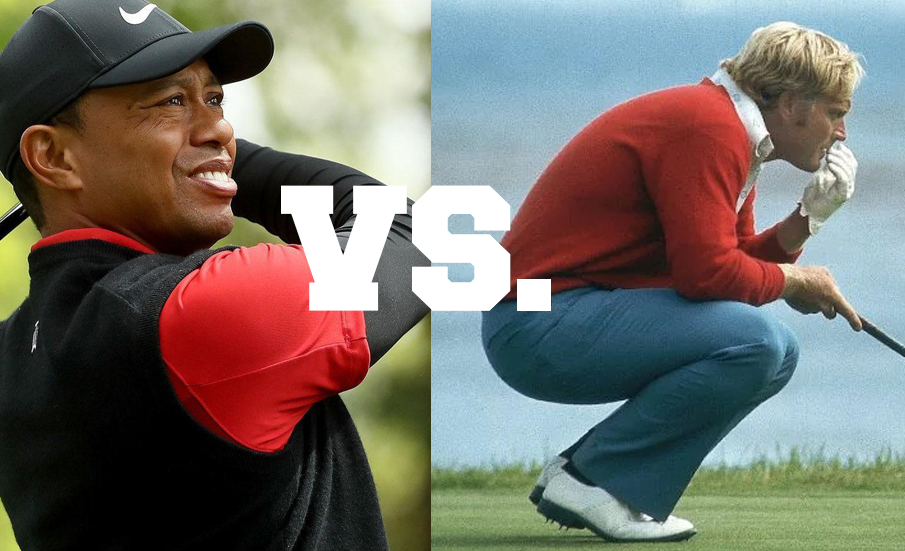 Jack vs. Tiger: Who’s the GOAT?

When it comes to champion golfers, who is the greatest of all time?

Granted it is difficult to compare golfers from different eras. Differences in equipment, course conditions, travel, strength of the competition, opportunities to compete etc. are all factors that make objective comparison impossible.

Historically the gold standard for comparison is a player’s record in the major championships:  The Masters, United States Open, Open Championship (aka British Open) and the PGA Championship.

By this standard, two players stand far above the rest:  Jack Nicklaus and Tiger Woods.

In the history of golf, only 5 men have completed the so-called “Career Grand Slam,” by winning each of these championships at least 1 time:  Gene Sarazen, Ben Hogan, Jack Nicklaus, Gary Player and Tiger Woods.

Jack and Tiger are the only players to have multiple victories in each of these championships, having won each of them at least 3 times.

For me, the discussion of who is the greatest comes down to these 2 players, and by a narrow margin I give the nod to Jack for the following reasons:

In other words, Jack came much closer to winning a potential 4th, 5th or even 6th career grand slam.

During the period when he won all but 1 of his majors (1962-1980), Jack competed against Gary Player (who also won a career slam) plus 4 other Hall of Fame players who completed 3 legs of the grand slam: Arnold Palmer, Lee Trevino, Raymond Floyd and Tom Watson. These 5 champions won a total of 34 major championships.

During the period when Tiger dominated major championship golf (1997-2008), only one player, Phil Mickelson (6 major wins) completed 3 legs of the grand slam.

This is my argument for Jack Nicklaus as the G.O.A.T.

Also, we must consider the possibility that Tiger is not finished.